Jewish communities in Germany are on the alert!

According to information reported by the tabloid BILD based on security circles, Jewish community representatives in several federal states are concerned about Islamist attacks on synagogues and Jewish institutions.

There is said to have been a “considerable increase” in hostile messages, calls and concrete incidents in front of Jewish communities within the past 48 hours.

The so-called hostile “contacts” are said to come mainly from men with an Arab background who use the escalation in Israel and the Gaza Strip as an opportunity for threats and attacks against Jewish communities in Germany.

On Tuesday evening, there were violent riots and attacks on Jewish citizens in the Israeli city of Lod, where many Arab citizens also live. Rioters set fire to a synagogue. The concern of many German communities: These anti-Semitic riots could also reach Germany.

According to BILD information, the Federal Criminal Police Office has also already consulted with the criminal investigation departments of the federal states about strengthening the guarding of Jewish institutions. Intensive talks between officials of the Federal Ministry of the Interior as well as the state interior ministries are expected on Wednesday.

In BILD, Felix Klein (53), the federal government’s anti-Semitism commissioner, calls on the authorities to adapt security measures in front of Jewish communities in Germany to the new threat situation. “The protection of Jewish institutions in Germany is particularly important now. The security authorities must keep an eye on the consequences of the current tensions in the Middle East on the security situation here,” said Klein.

On Wednesday evening, a spontaneous demonstration took place in front of a synagogue in Gelsenkirchen. According to the “Initiative against Anti-Semitism Gelsenkirchen”, anti-Semitic slogans were being shouted there.

The police called for reinforcements and the situation calmed down at first. About a hundred demonstrators still marched through Gelsenkirchen in the evening. 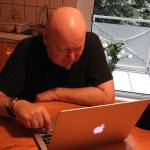 WATCH: “Child Murderer Israel”, “**** Jews” – Muslims are already rehearsing for a progrom in front of the synagogue in Gelsenkirchen, Germany – Allah’s Willing Executioners

▶︎ In Bonn, the Jewish synagogue on Tempelstraße was pelted with stones on Tuesday evening. The police seized three papers with probably Arabic writing on them at the scene. On the pavement they found a white and blue flag – very probably the Israeli flag – which had been set alight. Three suspicious men (20, 20 and 24) were temporarily arrested.

▶︎ According to BILD information, there were also concrete threats against the liberal Jewish community of Hanover. As BILD learned, a man called the community on Monday and threatened to set fire to the synagogue. The Ministry of the Interior has been informed, the State Security Service is investigating. An Islamist background is suspected.

There was an anti-Semitic arson attack in Düsseldorf on Tuesday. In Kasernenstraße, an attempt was made to set fire to a memorial plaque for a former synagogue using an incendiary liquid. Fortunately, there was no major damage. The perpetrators are as yet unknown. The State Security Service is investigating this case as well. The memorial commemorates a synagogue that was destroyed by the Nazis during the November pogroms in 1938.

▶︎ In Münster, the State Security Service is investigating the burning of an Israeli flag on Tuesday evening: a group of about 15 people burned an Israeli flag in front of the synagogue on Klosterstraße. Eyewitnesses alerted the police. They were able to arrest 13 people.

Sharon Fehr, chairman of the Jewish community in Münster, spoke to BILD of “great uncertainty in the ranks of the members” after the incident. It was “a terrible thing that happened here in front of the synagogue.

Fehr told BILD: “There seems to be a lot of bubbling under the surface. We are appalled by what has happened here. And anyone who burns an Israeli flag in front of a Jewish place of worship loses all decency, any form of tolerance and the efforts towards human coexistence.